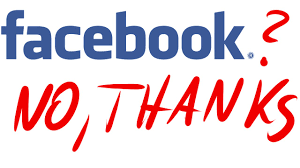 Facebook has been in the news quite a bit in the last few weeks, and I’ve finally reached the conclusion it is time for me to go. Now, I know Facebook will not care. I do not have millions of followers. I’m not an influencer, nor do I have an Instagram account or use any of their other services.

Over the last few years, I’ve become increasingly disillusioned with social media. I’ve written about it extensively here and elsewhere, but I believe strongly that people are entitled to their privacy. Social media companies believe the opposite, and believe it is their solumn right and duty to invade every aspect of our lives for their profit. I say no more! Basta!

I didn’t delete my Facebook account entirely, however I did put a note that I will not be using it anymore. I had already removed all Facebook applications from my phone, including Messenger, Instagram, WhatsApp etc.

Until recently, my continued objection to social media in general (with the exception of LinkedIn) was the invasion of privacy. I’ve researched and written about how these companies are stealing your privacy and profiting from it. But in the last few months, I’ve been reading a lot of research about the dangerous side effects of social media and come to the conclusion that it is much worse than simply invading your privacy. Social media is about behavior modification.