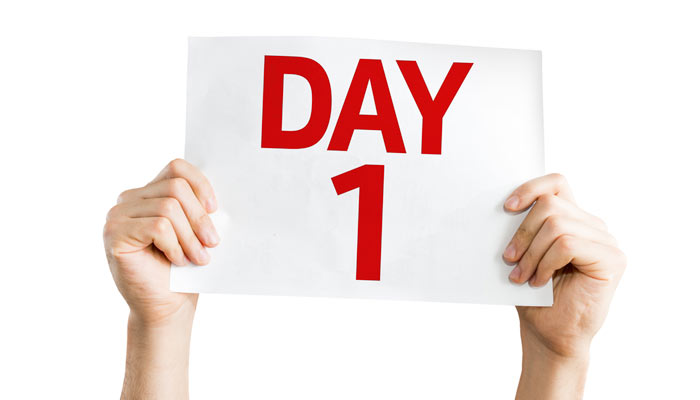 So I Launched a Startup Pt. 4: The First Day

In my last article, we had just gotten word that we were getting funded, and my doctor found a tumor that required immediate surgery. (I’m fine now, Thank G-d). A little more color, at this point, I had an idea, $1.6M in the bank, not much of a team to speak of, and investors who presumably want some sort of return on their investment. I still was working at JP Morgan at this point but getting ready to give notice. The big question in my mind at this point was, “What the hell do I do now?”

The first thing I did was buy a standing desk. I would definitely recommend one as my back has never been happier.

Ok, seriously I didn’t want to quit my job at JP Morgan until we had health insurance in place and until it was absolutely necessary. I also didn’t want to abuse my position at JPM and be doing startup work on JPM time. But my investors were expecting me to get moving on this, so get moving I did. Finally in October, our health insurance cleared and I gave notice at JP Morgan. Because I work in cyber security and was a VP, I had to give 30 days notice, but once you do that, you lose all access immediately. So… I was “working” for JPM for 30 days and getting paid, but had no responsibilities.

I will tell you that the first day after I resigned from JPM and started full time was absolutely terrifying.

Tangent: Starting a Company is Hard

A brief tangent. I’ll say the obvious, but starting a company is really hard. I don’t mean the actual running of a company, that’s very hard too, but the actual bullshit of registering with the government, setting up bank accounts, benefits, payroll and more are quite complicated. I am fortunate enough to have a non-technical co-founder, Josh, who handles a lot of this as I just do not have the patience for it and it causes my f-bomb per day ratio to exceed my limit. But in any event, one of the aspects of being a startup CEO that caught me off-guard was how much time we had to dedicate to administrative activities. Interestingly enough, this was especially acute during the COVID pandemic. While we didn’t have to get an office or co-working space, and we could hire people anywhere in the country, the side effect is that we have to register with the various government authorities in every jurisdiction in which we have an employee! So… my tip to prospective founders is don’t underestimate the amount of time you will have to spend dealing with these kinds of issues.

What do you do now that you have the money?

For someone like me, this was really a big question. I am a first time founder so it wasn’t entirely clear to me how you get going with this, or even how I would know if I was doing a good job or not. Fortunately, I have two great startup mentors who told me two things that really helped.

Darren, who is our head of growth, suggested a strategy whereby we form a product council consisting of data executives who would be potential customers and meet with them regularly as we are developing the product. At this point, we weren’t even certain what we were building. I mean we had the general idea, but the specific features were still up in the air. Darren made the point that many startups waste a lot of time and money building the wrong thing. They get funded, start building without talking to customers, and start showing the product once it is built. Inevitably, when you do that, your customers will tell you that they wanted X instead of Y or whatever. Building the wrong thing can be a fatal mistake for early stage startups because if they aren’t able to find the right thing quickly, you perish. Darren’s strategy would help us avoid that by talking with prospective customers early and frequently so that we could make sure that we were building what people were actually interested in. As an early stage company, time is not on your side. You absolutely must get a product out the door as soon as you can so that either you can raise more money, get revenue or both.

At this point, one of my investors was growing concerned that we had not hired anyone yet. As an early stage founder, one of your most important jobs is the ability to attract and retain top talent. In the startup world, pedigree of your early hires matters, and it looks good to investors that you hired someone who is “ex-Google” or “ex-Apple”. I still wasn’t ready to hire yet because it wasn’t entirely clear what we were building. Finally, around mid November, and many, many customer interviews and product council meetings, it was time to start hiring.

But who to hire?

Our first hire was not a software developer, but rather a UX designer named Brittany. I know I haven’t really said much about the product, (next week) but you might be wondering why a UX designer? Simple. The UX of most data tools looks like it was done by a corporation that specializes in DMV websites. People do judge books by their covers, and I believe that having a product that looks beautiful, and is easy and intuitive to use will make people love using our product. So, having a strong UX team was vital. With that said, I knew next to nothing about UX, I had to hire someone that understood my vision and could deliver good results without a lot of direction.

This actually was a big philosophical choice for me and one in which I actually went against the advice of one of my investors. I am of the opinion that software must have an amazing user experience to be successful. Everything has a user experience, whether you intend for it or not, so in my view, it is very important that the UI is designed with intention. More on this later. Great UI/UX won’t sell software by itself, but I will tell you that every time I demo our product to investors or potential customers, they are always impressed by how it looks and feels. I’ve had many people tell me things like, “Your product does not look like a minimal viable product (MVP)”, or “Your product really looks beautiful.”

In any event, after reviewing her portfolio, and having a colleague who is an actual UX expert interview her, I decided to give her an offer.

It’s funny, as I’ve done countless interviews for Booz Allen and others, but I had never been the sole person making a hiring decision, nor have I ever had to negotiate a salary. I really had no idea what kind of salary to offer, other than I wanted to make sure that we were paying people well. I set a meeting with Brittany to formally give her an offer and discuss salary, and I couldn’t believe how nervous I was. Firstly, I was really worried that she’d pass entirely. After all, it does take some serious guts to be employee number 2 at a fledgeling, early stage startup. Fortunately we quickly came to an agreement on salary and Brittany joined us shortly thereafter.

So we had a UX designer and we were ready to start mocking up our tool! In the next installment, I promise I’ll finally tell you what it is we’re actually building. Next week, I’ll be in New York, giving demos to prospective customers as we’re gearing up for our first release.